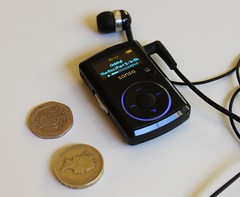 Eventually, I reached a point with my long-suffering and much-repaired iPod where it didn’t seem to be worth continuing to pay to get it fixed up again, especially since I could reasonably switch to a device with solid-state storage instead of a hard disk.  Since I’m trying to avoid using Apple products because of both ideological and pragmatic concerns, I went for the strategy of trying to buy the cheapest option in Dixons (sorry, “Currys.digital”) when I was running for a train.  (This approach minimised the amount of time I could spend on the decision and so created extra happiness in itself.)  The device I came away with was an ex-display model of the Sandisk Sansa Clip, with an extra discount because it was actually missing the clip bit.  That came to £30 for an 8 gigabyte device, whereas an iPod nano with the same storage would have been about £140.  (Of course, it doesn’t have the gorgeous screen of the nano and can’t play video – on the other hand, 8GB would get filled up fast if I put any video on it.)  The biggest advantage of this cute little device over the iPod, of course, is that it’s much less likely that the manufacturer will deliberately prevent the device from working with my computer, as Apple have repeatedly done to GNU/Linux users who’ve bought their devices.

Anyway, I’m basically very happy with this replacement. There are a few small user interface problems, e.g. I miss the click-wheel for seeking within a track – fast-forward and rewind on the Clip are a bit sluggish initially.  Additionally it takes a couple of seconds to wake up after it’s been paused for a while, which is surprisingly irritating.  On the other hand:

Sadly, gapless playback doesn’t work, which is basically par-for-the-course for MP3 files (even when they have correct delay and padding in the metadata), but rather surprising in the case of FLAC and Ogg Vorbis files.

The only other problem was getting it to present podcasts in the way that I like, which is probably due to my odd preferences rather than the device itself – the rest of this post is about that.

This may be unusual, but I find the most useful way to go through podcasts on any audio player is to have all of the most recently downloaded episodes from any  source in one playlist, ordered from oldest to newest.  With gtkpod and my old iPod, you could easily set up a “smart playlist” to do this, but I had to write a short script to create this on the Clip.  It’s simple enough, apart from one point:

(Incidentally, I heartily recommend hpodder as a podcatcher – it’s the only one I’ve found that does what I want in its default configuration.)

In case it’s of any use to you, the script is included below – it’s hosted as a gist on github, so you can clone it (or download the raw file) from the links below the file.