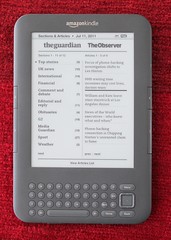 It seems that finally The Guardian have an official Kindle version, that you can subscribe to here:

The Guardian and The Observer [Kindle Edition]

A subscription costs a very reasonable £9.99 per month, and like all the official Kindle periodicals, it appears on your device automatically if wireless is enabled.  It looks as if they’ve done a very nice job – I’d encourage anyone who was regularly using my unofficial Guardian for Kindle project to subscribe to the official version.  As well as the convenience of automatic delivery, you get more complete content (since a number of articles aren’t available for free via the Guardian’s API) and bigger photos for each story.  In addition, with newspapers in general struggling these days, it’s good to be able to support them by paying for this service.

Where does this leave my unofficial version?  My plan is to leave in place the system that generates the web-hosted version each day, but prominently link to the official version on that page.  The version generated from the Guardian’s API might be occasionally useful for people, and I think the project is of interest in its own right – figuring out how to generate Kindle books and then periodicals was hard work, and it’s still a satisfying project to have got working so well in the end.  Even masthead images now work, thanks to a tip from Marco Arment!  (Again I should thank Dominic Evans for figuring out how to switch from generating books to periodicals, and his other contributions.)

I’ve summarized what I’ve learned so far about generating periodicals using Kindlegen in this Stack Overflow answer, and I’ll update that if I find out anything new.

One thought on “Official Kindle subscription to The Guardian”