I’ve seen many people link to a news story claiming that “cassette tape” has been removed from the Concise OED — this story appears to be complete nonsense,  and I’m genuinely intrigued as to how it got started.  Of course, none of the news stories that repeat this claim cite any source.  This is a minor example of a serious problem that Francis has blogged about.

TIME magazine is perhaps the highest profile publication to  make the claim, saying that “cassette tape” is being removed from the Oxford English Dictionary and referencing The Huffington Post as its only source.  Firstly, the TIME story is obviously nonsense taken literally, since the OED is a historical dictionary and words generally aren’t removed from its 20 volumes at all.  Other stories clarify that this is supposedly a scandal with the new (12th) edition of the Concise Oxford English Dictionary, which was released in August 2011 to a flurry of stories about the various entertaining new words that have been added to it.  The news stories about those words seem to be largely based on two blog posts (here and here) from Oxford University Press that discuss in general terms what has defined the COED over its 100 year history.  Neither of those posts mention anything about “cassette tape” being removed.  (I haven’t found any more official press release about this new edition online.)

Anyway, suspecting that this story was nonsense, I did the obvious thing and looked in the new 12th edition of the COED in a local bookshop.  Of course, cassette tape is still here: 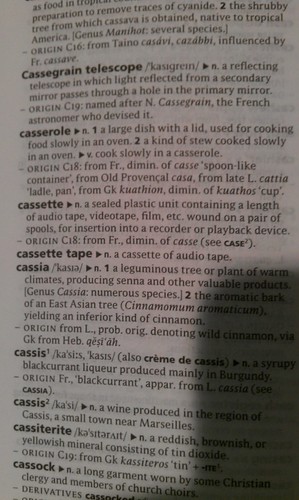 So, my real question is: “Who is it that just invents this stuff?”

3 thoughts on “No, “cassette tape” hasn’t been removed from the Concise Oxford English Dictionary”