Update: While the device I discuss below initially seemed to work promisingly as a repeater, we’ve had lots of problems with it – it seems to work fine for a few hours, but then will stop working for no clear reason. At some point I’m going to try reflashing it as suggested in the link below, but I haven’t been in the same house as the router for any appreciable amount of time in the last 6 months. The post below is as I originally wrote it, but please be aware that it hasn’t worked nearly as well as I thought at the time of writing. Update 2:  having revisited the house recently, it seemed to be better having changed the default address of the TP Link device to be different from the BT Home Hub (duh) and outside the latter’s DHCP range, so I’d recommend checking that.

I’m posting this because we found it surprisingly hard to find convincing instructions for setting up a device to extend the range of a wireless router, and I suspect many other people might be in the same position.  In the end, the device we got was very cheap, easy to set up, and it’s a great improvement.

Please bear in mind that I’m just reporting what worked for us – I can’t guarantee the same will work in your situation or provide any technical support.  (I’m pretty ignorant about WiFi, it turns out.)  I imagine that this will work fine with other wireless routers and the BT Home Hub 3, but of course I can’t promise that.

We found that one end of my parents’ house had very poor wireless LAN coverage, since for various reasons the BT Home Hub 2 has to be placed at the opposite end of the house and there are plenty of walls and other obstructions.  (For those outside the UK, the BT Home Hub is just an ADSL modem and wireless access point which BT give you when you order their broadband service – it’s quite a basic model and I assume the method described here would work with any wireless access point.) 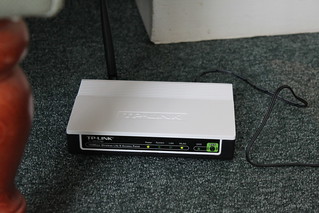 Some searching turned up this suggestion from Keith Beddoe from the BT community forums.  His second suggested option is to set up a particular TP Link wireless access point as a “Universal Repeater”, but suggests reflashing the access point with some files he supplies.  I’m always slightly wary of reflashing devices unless it’s absolutely necessary, and it’s not clear why it is in this case – the manual for the TL-WA701ND says that it can act both as a Repeater and a Universal Repeater.  (The distinction between those two for this device seems to be that the existing router must support WDS in order to use the Repeater option – since the BT Home Hub 2 doesn’t, we want the Universal Repeater option.)

The only steps I needed to take to set up the access point as a range extender were as follows:

The effect of this is that there are now two access points with the same SSID as the BT Home Hub listed in the output of “iwlist scan”.  The network manager on my laptop only lists it once, though, as does my smartphone.  If I walk with my laptop from one end of the house to the other, it seems to reconnect seamlessly when moving into an area that is only covered by the range extender, and our phones behave similarly.  So, that seems to be ideal and we get a good signal all over the house now.

The price of the TP Link TL-WA701ND is only £23, and this seems like a reasonable price to pay to get wireless LAN in the garden :)